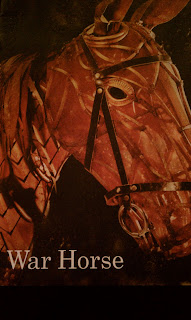 You hear the words "puppets" and "horses" and you think, "Oh, I'll take the kids."  In the case of War Horse, which opened April 14 at Lincoln Center Theater, be aware that the kids you take should probably be older than 11 or 12.

There's nothing objectionable at all in the sex-drugs-cursing vein in this story of a British boy, his horse and their travails during World War I, but the theatrical magic that has caused this show to be a runaway hit in London's West End and Lincoln Center to declare an open-ended run, translates into very intense battle scenes onstage.

That was what impressed me on this second viewing, accompanied by my 13-year-old daughter - the vivid depiction of the utter, awful, meat-grinding futility of that Great War that opened the 20th century. Soldiers die, horses die and the tank overcomes the last century's cavalry.

On my first viewing, in London last summer, the justly famous life-size horse puppets (should they be called "constructions"?) entranced me. The feature I wrote for www.theatermania.com about how the show developed, based on an interview with directors Marianne Elliott and Tom Morris, is here.

South Africa's Handspring Puppet Company created young Albert's bay horse, Joey, and a black steed, Topthorn, both of whom are put to work on the battlefield by the British Army. The story is a beautifully simple journey: teenage Albert is separated from his beloved animal, then enlists to try to find him again. Along the way, the two horses come under the control of a humane German officer and we see the war from both sides.

Elliott and Morris have tightened the show. In London, I remember feeling a little manipulated by the sentiment and believing the show was too long, both of which happen when slow pacing blunts the emotions. Here, the time (clocking in at 2 hours, 45 minutes), flew by and both Flo and I were reaching for the hankies. Gasps and applause greeted the moments when the foal Joey flies apart to become the beautiful, fully-grown horse and the first time Albert leaps on his back.