Recently attended the premiere screening of the high-definition (HD) recording of the Broadway musical "Memphis." My feature on www.theatermania.com about the HD recordings of "Memphis" and "The Importance of Being Earnest" is here.

Held at the Regal 14 on Union Square in Manhattan, the "Memphis" screening had a distinctly celebratory air as Bruce Brandwen of Broadway Worldwide (the company that recorded the show) and "Memphis" producer Sue Frost welcomed the audience to a truly historic event. It's the first time a Tony Award-winning Best Musical has been recorded in HD ... with the original cast ... and screened in movie theaters across the country while the show was running in New York and before the stage tour took to the road.  (The tour starts in October, 2011.) 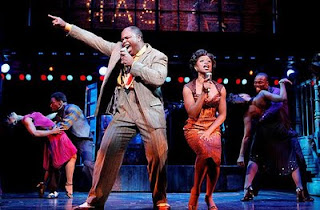 Delightfully, the film (OK, it's not a film, it's a digital recording, but occasionally I'm gonna say "film") opens with an interview with book writer Joe DiPietro and composer-lyricist David Bryan who endearingly relate how they came to each other's professions (DiPietro's a playwright and Bryan plays keyboards for the rock group Bon Jovi). Their story about and reactions to winning Tony Awards within the first 15 minutes of the awards show is definitely worth the price of admission.

"Memphis" itself blazes off the screen. Video director Don Roy King has done a beautiful job. I was especially struck by the extraordinarily skillful editing. The takes aren't too short; they are held just long enough for the maximum emotional impact of the lines, the reaction, the song -- whatever's happening on stage.  For those who are used to the three to five-second takes of the sports world, this work is a revelation. However, my seat companion, a veteran in the world of video, said the sound dubbing wasn't precisely in sync at several points, but when I paid close attention, I didn't see a problem.

Eventually, to tell the truth, I almost forgot I was watching a two-dimensional version of the show, so thoroughly did the filmmakers (that word again) capture the emotion and essence of this story: in the late 1950s, a white disc jockey named Huey Calhoun (played by Chad Kimball), falls in love with a black singer named Felicia Farrell (played by Montego Glover) in segregated Memphis. He plays rhythm and blues for white kids and tries to advance her career; eventually, she moves on and up without him.

I hope this project gets Montego Glover the additional attention she deserves because she is a huge talent (that's her in the photo on the right) - smokin' voice, dynamic presence, engaging actress. While I admire Chad Kimball's passion as Huey, both when I saw the show live and in the film, I still don't understand the odd diction and body language he brought to the character, slouching around a bit like Groucho and drawing out the last syllable of every other word - "Mem-phay-ass-uh."

There was one scene that burned into my consciousness even hotter than it did on stage, and that was J. Bernard Calloway as Felicia's brother, Delray, singing his rage and pain at the South's segregation and racism in "She's My Sister" and that's why I chose a photo featuring Calloway, above.

If you live outside New York and haven't seen "Memphis," go see the movie-theater version or the touring show. Either way, it's an uplifting theatrical experience.