In New York, the Royal Shakespeare Company creates space within a space


This year's Lincoln Center Festival in New York (July 5-August 14) contains a particularly exciting theater component - or perhaps it should be spelled theatre, in honor of the Royal Shakespeare Company's soaringly ambitious plans for a six-week residency. On June 30, news media were given a tour of the theater the RSC is building within the giant space of the Park Avenue Armory's main hall, where its five productions will be staged.

At a (donated) cost of $1 million, the RSC has recreated its playing space at the Courtyard Theatre in Stratford-upon-Avon, England. The thrust stage is designed to create an intimate experience for the audience - an idea that aligns with what artistic director Michael Boyd has created in the past three years, keeping an ensemble of actors together to explore and grow through the Shakespearean canon. The New York performances will spell the end of their time together, he said.

"It is all about collaboration ... the ensemble is reflected in the auditorium. Theater is what happens in the space between me [an actor], the other actor and you the audience. Here, we hope to bring the delights of an audience aware of itself, which is something the cinema can never do," he said, adding that at Stratford, audience members often to wave during the breaks to folks on the other side of the theater and he hopes that will happen in New York, also.

As one who saw the RSC's King Lear with Greg Hicks last summer in Stratford, I can testify that the space has been reproduced quite faithfully, although head of construction Alan Bartlett told us that at 975 seats, there are 100 fewer than in Stratford, due to technical issues. Ingeniously, the stage has been built atop some of the 46 containers used to transport all the gear needed, with acoustic sails and drapes deployed to improve the sound in the 55,000-square-foot hall. For Lear, which I thought had a few too many directorial concepts, they'll need falling scenery, a rain shower on stage and flying light fixtures.

"It is ludicrously ambitious," said Boyd, when asked if the RSC had considered simply using an existing New York theater. The donation from the Wexner family - truly extraordinary in a time of economic constraint - made it possible. "Why did we do it? Because we could," said Boyd - and because "the audience will have a better time."

In addition to Lear, the RSC will also be staging As You Like It, The Winter's Tale (a play I have come to love after I saw it at Shakespeare's Globe theater in London), Julius Caesar (oddly, my favorite Shakespeare play when I was a teenager), and Romeo and Juliet.

The temporary theater will be called the Scarlet and Gray Theater, the colors of Ohio State University, which is supporting the RSC's residency and partnering with the Park Avenue Armory in education initiatives. (The 130-year-old armory has been transformed in recent years into a thrilling space for the arts.) They will bring young people from underserved communities in New York to experience Shakespeare and run workshops for teachers and teaching artists. Another program introduces Shakespeare to autistic students.

Having just graduated from New York University with a master's degree in educational theater, I can attest to the extraordinary effect of Shakespeare upon young people. It is truly life-changing. Just a taste:

-- In Stratford, Ontario, home of the Stratford Shakespearean Festival, elementary school children - as young as eight and nine - who are exposed to Shakespeare show incredible improvement in their writing over the course of a school year.

-- In my town of Mamaroneck, N.Y., just north of Manhattan, a beloved program at Mamaroneck High School is called The Semi-Royal Shakespeare Company (!) and stages two productions per school year. The director, Dee O'Brien, has been leading it for nearly three decades. From the viewpoint of an experienced theater critic, the shows are not just "good for high school;" they are good by any standard.

-- In an NYU course last year, our class worked with middle school and high school students on Shakespearean monologues. The passion and maturity of these students as they joyfully made discoveries in the text was inspiring.

Welcome, RSC. May New York treat you well and thanks for coming.

Posted by Solange De Santis at 4:32 PM No comments: 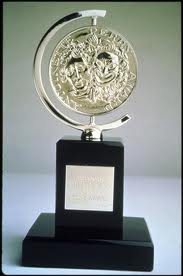 Posted by Solange De Santis at 10:18 AM No comments:

Godspell is for real

In my first flight as a producer -- $1,000 sunk into Ken Davenport's Broadway production of Godspell -- I could perhaps be forgiven for feeling a bit of skepticism. Yes, I'm as hopeful and starry-eyed as any actor who spots a casting director across a crowded room, but given my usual pessimism about investing (although I have had a few winners), I wondered if Godspell would actually appear.

Well, it ain't no burning bush (the tree seems to be unscathed), but something infinitely better, theater-wise -- the Broadway marquee at Circle in the Square on 50th Street.

Ziegfeld, Merrick, Hammerstein -- let me in to that august company. I'm booking the table at Sardi's now.
Posted by Solange De Santis at 11:11 PM No comments: