Mamaroneck, N.Y.'s Westchester Sandbox Theatre continues to score the premiere regional runs of major Broadway musicals. As I was able to catch up with Bloody Bloody Andrew Jackson (see blog post here) several months ago, having missed it in Manhattan, I was similarly able a few days ago to see Avenue Q, the puppet drama that is decidedly not Sesame Street. 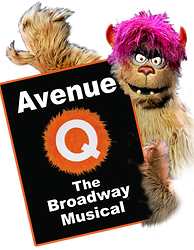 It's the same idea -- a group of characters hanging out in and around an urban apartment building -- but with a decidedly adult twist. You really haven't lived until you've seen two "naked" puppets having sex.

The story begins with naive young Princeton (Todd Ritch), who sings the witty opening song, "What Do You Do With a B.A. in English?" which is as resonant now as it was ten years ago when Avenue Q opened. He is, of course, looking for an apartment -- the eternal Manhattan quest -- and finds one at a building where the janitor is Gary Coleman (Kenney M. Green), "the" Gary Coleman formerly of TV fame.

The other residents are unemployed (this really is relevant today!) Brian (Jeremy Geller), giving voice to his circumstances in "It Sucks to Be Me." But it doesn't wholly suck to be Brian, as he has a fantastic Asian wife (Alanna Chuyan) named, inexplicably, Christmas Eve.

The original concept by Robert Lopez and Jeff Marx (also responsible for the book and lyrics, respectively) cleverly included a video screen with various animated scenes commenting on the action. One can also see why Lopez was chosen to work on Book of Mormon, as characters that recall the squeaky-clean puppets of Sesame Street live in today's f-bomb reality.

There's a youth-TV type of social lesson - the "monsters" (Kate is one) are discriminated against and Kate forms a special school (the "Monsterssori School") for them.

The scenic design by Bob Butterley makes the most of a simple apartment block facade. I liked lighting designer Nathan Gray's choice of shadows for the opening. Stephen Ferri's small band was tight and bright and Bryan McPartlan and Jon Hatton's sound design able supported the players.

Overall, the songs and Jeff Whitty's book are so jaunty and good-natured that where I found Book of Mormon to be leering and not particularly amusing, I was perfectly willing to go where Avenue Q's troupe wanted to lead.

Posted by Solange De Santis at 5:00 PM No comments:

Sandbox in the garden

Theater companies need to keep moving - like sharks in the deep ocean - in order to live. By that I don't mean change for change's sake, but movement that is a logical outgrowth of what's gone before.

The Westchester Sandbox Theatre, coming up on the fourth anniversary of its founding in November 2008, last weekend produced its first outdoor show in its home base of Mamaroneck, N.Y. - a production of You're a Good Man, Charlie Brown.

This follows by a few months the theater group's first partnership with the town's primary theatrical venue, the Emelin Theatre, on a production of Smokey Joe's Cafe (see that blog post here).

The Sandbox is primarily a youth theater, but also produces adult shows (such as Smokey Joe). Executive director Dan Ferrante, partnering with the Village of Mamaroneck Arts Council, staged the show in Columbus Park, a venue next to the Mamaroneck Metro-North train station, but separated from it by a river and trees that buffer the train noise. That's the 19th-century station in the photo below, now a restaurant called Club Car.

Although stagehands were still hammering the set together at the scheduled start time of 3 pm on a gorgeously mild Saturday afternoon, things got rolling shortly thereafter and this free community show became an experience of pure pleasure.

They were all fine singers and exhibited a brisk level of professionalism that was really tested when a gust of wind blew over Lucy's blue "the doctor is in" stand (she gives psychological advice). The cast vamped and supported the stand until a couple of helpers ran over and got behind it to hold it up.

Ferrante and a drummer (there was no program) ably provided the musical accompaniment, the body mics worked and lyrics were clearly heard (often a problem with an outdoor gig). Since the weather was cooperating, families brought folding chairs, blankets and snacks.

These little girls (see photo at right) never stopped dancing during the hour-long show and I greeted several friends and neighbors, including a couple who had brought their one-year-old daughter.

However, the performers onstage were doing their jobs so well that they held the attention of an audience potentially distracted by sunlight, afternoon bustle, kids and rustling chip bags.

This was a beautiful and logical development of the Sandbox Theatre's youth and community mission and I hope it becomes an annual event.
Posted by Solange De Santis at 11:00 PM No comments:

Although I don't think Ragtime is a great musical, you couldn't find a better production that the one playing now through October 14 at the Shaw Festival in Niagara-on-the-Lake, Ontario, directed by the festival's artistic director, Jackie Maxwell.

The festival, currently celebrating its 50th year, began by focusing on the works of George Bernard Shaw and his contemporaries, then expanded to include contemporary works set within the timespan of Shaw's life. Good thing he lived to age 94 (1856-1950)!

Ragtime, set in the first decade of the 20th century and based on E.L. Doctorow's novel, premiered in Toronto in 1996 under the banner of producer Garth Drabinsky's Live Entertainment Company. I remember interviewing Drabinsky for a story in the Wall Street Journal, where I was a staff reporter at the time. It was at rehearsal and Brian Stokes Mitchell was onstage. "He's going to be a major star," I remarked and Drabinsky replied, "Yes, and I've got him."

Not only did Stokes Mitchell create a huge impression, but so did Audra McDonald and Marin Mazzie. The production even featured a ten-year-old Lea Michele, later to star in Glee.

Doctorow - and the show - set out to create a sweeping sense of American life at the start of a turbulent era.

That's been my problem with this show. It's always felt like a preachy history lesson where the human stories are presented in frames - "now look at this" - rather than developing organically. However, Stephen Flaherty and Lynn Ahrens' music and lyrics find the passion and beauty of the stories: the New Rochelle family's Mother (as she is called) finds an abandoned baby and takes in him and his desperate mother, a black woman named Sarah; the baby's father is a ragtime pianist named Coalhouse Walker who eventually seeks justice through violence; and the immigrant, Tateh, tries to survive the poverty of the Lower East Side and make a better life for his daughter.

The dazzling score, featuring such wonderful melodies as "Ragtime," and "Wheels of a Dream," receives heartfelt interpretations from the magnetic Thom Allison as Coalhouse, sensitive Patty Jamieson as Mother, Jay Turvey as optimistic Tateh, stalwart Benedict Campbell as Father. Alana Hibbert as Sarah can't quite match the vocal power of McDonald (and it's probably not fair to compare anyone to McDonald), but brought out a fragile quality in the character.
Special mention should also go to featured player Nichola Lawrence who has an electrifying bluesy turn in the role of Sarah's Friend.

Sue LePage's scaffold-like set provides number of satisfying levels as Morgan, Ford, Goldman and Booker T. Washington all need to declaim at some point. Alan Brodie's lighting design, coupled with Ben Chiasson's and Beth Kates' projections (one that really impressed me was an impressionistic video of life in the tenements), really lift the show into heaven.

Maxwell's staging is so interesting - such as two wheeled frames representing ships, one of which is carrying Father to explore the North Pole with Admiral Peary - and the cast performs with such consistent style. But Ragtime, at two hours, 45 minutes, has always been too long. For instance, the song "What A Game" (about baseball) doesn't move the action forward and could be dropped. However, as I was thinking those thoughts during the song, I was simultaneously enjoying Campbell trying to tell his son about the game while shielding him from the raucous elements in the crowd.

I'm glad to see that Ragtime is a hit for Shaw, which hasn't done many musicals, as this luminous production certainly deserves to be one.

A couple of personal notes: in 1996, long before I came to live in Mamaroneck, N.Y., just a few miles north of New Rochelle, I took no notice of a line in the show spoken by a train conductor: "All aboard for Mamaroneck!" This time, it produced a moment of delight for me and my companion, teacher and director Ron Cameron-Lewis, a visitor to Mamaroneck this year.

A friend in the cast, Stewart Adam McKensy, continues to be one of the most talented tap dancers, singers and actors I've seen and ably anchors the ensemble (that's him in the center of the photo above). The Shaw audience will really appreciate Stewart's talents when he performs as Coalhouse for several shows this fall. Break legs, Stewart.