Far away from violence and fear

I knew the cast of Come From Away, a new Broadway musical that celebrates the best of humanity in the dark days following 9/11, would get the Newfoundland accents right where a woman said early on that planes were landing at the "hairport."

The Rock's version of Celtic speech -- attaching an "h" to a beginning vowel and speaking with a rhythmic verve -- was just one of the island's unique ways that greeted 6,500 passengers from 38 planes forced to land in the town of Gander on that day of terror.

As American authorities closed U.S. airspace, dozens of incoming flights were diverted to Canada. With just 10,000 people, Gander's extra-long runway, from the days when it was a transatlantic refueling stop, made it a perfect location. 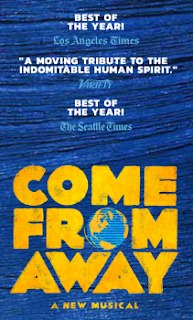 What happened to the passengers next was first told in a 2003 book by journalist Jim DeFede, The Day the World Came to Town.

The people of Gander and its neighboring towns mobilized in an army of concern and hospitality, opening churches, community halls and schools as shelters, providing clothing and food (even kosher meals), setting up phone banks and fax machines.

Then they went further - inviting the "plane people" into their homes for a bed and a shower, taking care of the animals on the planes, offering to lend personal vehicles for sightseeing.

In a place that's mostly white and mostly Christian, they took care of people from all over the world -- a point that now resonates most powerfully in a time of suspicion and fear.

The Canadian creators of Come From Away's book, music and lyrics, Irene Sankoff and David Hein, attended a tenth-anniversary reunion in Gander in 2011. The show was then initially developed by producer Michael Rubinoff at Canada's Sheridan College, where the dynamic music theater performance program held a celebration in New York on opening weekend.

Featuring an ensemble cast, the show opens with a rousing "Welcome to the Rock," a fast-moving introduction to Newfoundland, a windswept island on the edge of the north Atlantic, "where the winter tried to kill us." The island's harsh weather serves as a clue to its culture - sturdy people in a seafaring economy whose instinct is to band together for survival and whose humor is legendary.

Lest the idea of a "9/11 musical" (as some unfortunate headlines had it) conjure up the ultimate in bad taste, the horrific events in the U.S. are referred to through reactions - to a radio report, an unseen TV, a phone call.

A musical in the modern style that mixes narrative, song and movement, the 12-member cast plays many parts against Beowulf Boritt's spare set of planks and trees.

Director Christopher Ashley and choreographer Kelly Devine move the action swiftly, from the local Tim Hortons coffee shop to the airport, the planes and the town.

An eight-piece onstage band keeps the Irish-flavored music whirling, especially in a bar scene where some of the newcomers are made honorary Newfoundlanders by drinking the fiery rum called "screech" and kissing a cod.

One of the most affecting moments - again, in today's atmosphere - was a song called "Prayer," where the firefighter's mother prays at a Catholic church, the Muslim goes down on his knees and a Jewish rabbi chants. The song begins with the prayer of St. Francis: "Make me a channel of your peace."

The stress and tension of those days isn't glossed over - the school bus drivers are on strike and have to be convinced to come off the picket lines to drive hundreds of passengers from the airport, a Muslim passenger is the object of suspicion, people stuck in a strange place just want to get home, a woman is desperate for news of her firefighter son in New York.

The cast are all excellent, but standouts for me were the zestful Jenn Colella as American Airlines' first female captain, Beverley Bass and Joel Hatch as Gander Mayor Claude Elliott.

At times, the party atmosphere and celebration of all things Newfoundland made me a little uncomfortable, given the context. Yet the joy of discovering such humanity in a moment of ultimate darkness and evil bubbles to the surface, especially since one realizes that Americans were the refugees at that moment and were given shelter.

This was expressed most amusingly as an African-American passenger, played by Rodney Hicks, is told by the mayor to go get some barbecue grills out of some backyards so a big cook-out can help feed the passengers.

The black man is convinced he's going to be shot, then wonderingly relates how "every single person invited me in for a cup of tea and offered to help me steal their own grill."

"Sure, if you need it, go ahead and take it" -- that was the prevailing reaction in Gander, Newfoundland and its next-door towns on September 11, 2001.

This wonderful musical extols generosity and emotions that should last long after the current angry climate is swept away.