Jason Robert Brown's musical Parade, which received a revelatory one-night concert production at Lincoln Center on Feb. 16, proves (as did Sweeney Todd) that you can make a show out of just about any material.

Parade is the true story of Leo Frank, a Jewish factory manager in Atlanta who was convicted in 1913 of murdering Mary Phagan, a 13-year-old worker. Anti-Semitism, corrupt local politics and crowd hysteria influenced his conviction and when his sentence in 1915 was commuted from death to life imprisonment, he was kidnapped from jail by a mob and lynched.

I had not seen the show when it premiered at Lincoln Center's Vivian Beaumont Theater in 1998. It got mixed reviews ("solemn," said Ben Brantley in the NY Times) and closed just two months later. 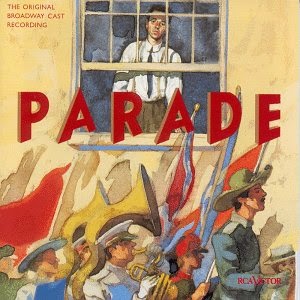 Lincoln Center seems to be its natural home, as this concert production 16 years later was in Avery Fisher Hall, home of the New York Philharmonic.

It was the third concert production of a Broadway musical recently staged by Manhattan Concert Productions (MCP), which also puts together music programs at Carnegie Hall and other venues.

MCP maintains a 30-member house orchestra, the New York City Chamber Orchestra, which proved to be a most impressive ensemble.

Composer (and lyricist) Brown conducted choir and orchestra with skilled assurance, showcasing his remarkable score to its best advantage. I was fortunate enough to see the original 2002 production of Brown's first musical, The Last Five Years, with Norbert Leo Butz and Sherie Rene Scott, and completely adored his most recent show, The Bridges of Madison County. With Parade, I'm a confirmed Jason Robert Brown admirer.

The story opens with the sunniest of American small-town traditions - a parade, in this case, the Confederate Memorial Day parade in Marietta, Ga., where a Civil War veteran sings "The Old Red Hills of Home," a skillful homage by Brown to Southern folk songs.

Quickly, however, alienation arrives as Frank, clearly uncomfortable as a Jewish northern transplant, sings "How Can I Call This Home?" and tell his wife that "I can't see how God created you Jewish and Southern at the same time."

Gary Griffin's direction and Brown's musical direction kept up the tension as Frank is arrested and local law enforcement and politicians whip up a frenzy designed to railroad him. However, the limitations of a semi-staged production and a balky sound system meant that sometimes it was hard to keep track of the characters.
Broadway stars Jeremy Jordan (also seen in the TV show Smash) and Laura Benanti traced the journey of Leo and Lucille Frank, from uncertainty through strain to love and support. Benanti particularly shone in the ballad "You Don't Know This Man," describing how the man she loves isn't the one portrayed as a murderer.

Jordan affectingly transmitted Leo's loneliness-in-a-crowd unease and he and Benanti climaxed the show with the duet "All the Wasted Time" as Lucille crusades for justice for him.

Joshua Henry, last seen in Violet, here brings down the house as a factory janitor and suspect in Phagan's murder, pointing the finger at Frank in "That'sWhat he Said."

My connection at this show was to Ron Cameron-Lewis, an emeritus faculty member of Sheridan College's top-notch music theater degree program. The Mississauga, Ontario-based college mounted a production of Parade last year and composer/lyricist Brown invited 35 students to join the 200-voice choir that would be performing in the concert. (Sheridan also hosted a pre-show reception that brought back alumni starring in such Broadway shows as Beautiful and The Book of Mormon.)

Chorus members also came from ten other schools and from community choirs, selling out Avery Fisher Hall with friends and family, who were quite vocal in their enthusiasm and reactions to the show.

Given the subject matter, I'm not sure I'd be playing the CD of Parade regularly, but then again, Sweeney Todd is a favorite. I do know that I'm very glad to have made the acquaintance of this haunting show and to have filled out my knowledge of Jason Robert Brown's musicals.