A brand-new theater blog and a brand-new adventure. I've become a producer -- call me Maxine Bialystok. I've taken a thousand-dollar flyer in Ken Davenport's imaginative approach to financing a Broadway show. He calls it "crowd-sourcing" (hello, Internet generation) and has lowered the cost of getting in to ten c-notes as opposed to the five figures-plus usually needed to whittle down Dad's inheritance.

The show is a revival of "Godspell," the venerable 1970 look at the gospels, with the best-known song probably being "Day by Day." This production has taken a while to get rolling and tomorrow we "People of Godspell," as Ken has dubbed our group, get to meet director Danny Goldstein at Sardi's. Well, I practically grew up at Sardi's as my fashion editor mom, Florence De Santis, interviewed celebrities there for her columns and often took me or my brother along. In a future post, I'll tell my Robert Alda story. That's right, Robert Alda, not Alan Alda.

So it'll be truly fine to revisit the caricatures on the wall, meet Danny and find out more about this "crazy fling," as I wrote on the memo line of the check. In future posts, I'll talk about why I'm doing this. Maybe I need to figure it out myself. 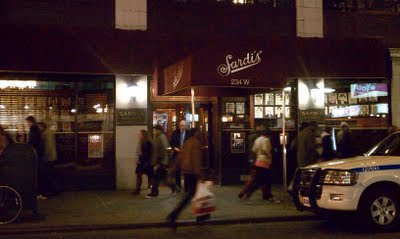