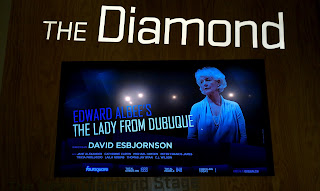 Posted by Solange De Santis at 2:31 PM No comments:

Vulnerable boats against the current

"In my younger and more vulnerable years, my father gave me some advice that I've been turning over in my mind ever since." -- "So we beat on, boats against the current, borne back ceaselessly into the past." Those are the first and last sentences of The Great Gatsby, F. Scott Fitzgerald's deathless 1925 novel about money and desire and the dark side of America's "pursuit of happiness."

They are also the first and last lines of Gatz, a "staged reading" unlike any I have ever seen. Over the course of eight hours -- 2 pm to 10 pm, with two short intermissions and a dinner break -- the entire 49,000-word text of the novel is read aloud, and it pushes the bounds of theater by making us fall in love with prose.

New York City's 21-year-old Elevator Repair Service, which specializes in unusual theater, approaches the drama of the book by not dramatizing it - in other words, by not creating a play out of the plot.

Director and company founder John Collins realizes that the narration of the story by the character Nick Carraway and Fitzgerald's ravishing prose are the drama. But this is three-dimensional theater and visual must be served.

So the glamorous world of Gatsby's Long Island mansions, "blue lawns," white flannels and champagne parties takes place - most improbably - in a shabby office in an unidentified downtown. Time? Apparently the 90s, judging from the clunky cordless phones and computers.

One of the beaten-down workers (Scott Shepherd) can't get his computer to work and it's taken away. Goofing off, he slides a book out of a Rolodex case and begins to read. "In my younger and more vulnerable years ..."

As Carraway, Shepherd (also, amazingly, appearing in Blood Knot further uptown at Signature Theatre) mostly reads the text with a medium-weight voice and a touch of the Midwest. It's a most attractive voice to listen to, not flamboyant, but very clear and possessed of a distinct though modest personality.

Apart from Shepherd, the most effective cast member for me was Jim Fletcher as Jay Gatsby, deep of voice and dangerous of manner. The cast also has a couple of unusual participants: Gatsby's father, who appears toward the end, bewildered by his son's death, is played very effectively by Dr. Ross Fletcher, chief of staff of Washington D.C.'s VA Medical Center. The playbill says he has played the role since 2005.

Sokol is a second-grade teacher at a school in Brooklyn. For me, Vazquez was miscast as Daisy. A tall, elegant woman with dark hair, she hardly embodies Daisy's fragility.

The actors' movements are also subtly deliberate and graceful, so the swirl of 1920s party dresses somehow both meshes and contrasts with a woman carrying a stack of papers through an office.

Sometimes the emphasis on the visual distracts from such sentences as this: "The wind had blown off, leaving a loud bright night with wings beating in the trees and a persistent organ sound as the full bellows of the earth blew the frogs full of life."

One scene in particular, a drunken party in a New York hotel room attended by Carraway, Tom Buchanan and his lover Myrtle, isn't enhanced by the characters/office workers tossing papers into the air, symbolizing the chaos of the moment. It smacks of an actorly exercise.

These are small points, however. The day married a book I've loved for more than three decades and my great love of theater and gave me a single masterpiece.
Posted by Solange De Santis at 11:23 PM No comments: