The theater is not like the movies. The stage version of The Lion King notwithstanding, theater doesn't need vast landscapes and special effects to create drama. A simple living room with a couch and two chairs can be a setting for high emotion, as seen in The Danaid by Thomas Michael Quinn, produced recently in downtown Manhattan's Thespis Theatre Festival and directed by Quinn.

The play's title and poster (see below) indicate an intriguing merger of mythology and theme. The Danaid is a sculpture by Rodin that shows a daughter of Danaos collapsing in despair over her impossible task -- filling up a bottomless barrel with water in punishment for killing her husband on their wedding night.

The rest of the poster? A spilled drink over a birth certificate, which in this case belongs to a girl given up for adoption. There's a secret involved and the two sisters squaring off at the center of the play -- tall, blond, self-assured Joan (Karen Forte) and meek, sweater-wearing Claire (Phyllis Lindy) -- hold pieces of it. 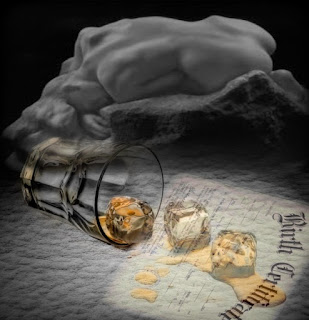 It seems that the baby given up years ago -- Sarah (Lauren Tyrrell) -- is now a young woman and will shortly be coming to call, since Claire has contacted her.

This is a premise ripe with potential, but it's not fully realized in The Danaid. As Joan, Forte stalks the stage like a long-legged lioness, spitting anger, bullying her sister,
spurning Sarah and lashing out at her husband, Tim (James Reed). Although we're given some insight into why she's a ball of rage, it seems out of proportion. Her character also doesn't develop; she begins at a high emotional temperature and stays there - a tiring experience for an audience.

As for Lindy's Claire, you want to walk up onstage and give this woman a hug but eventually you also want her to show a little backbone. Again, the play also keeps her on one level - meek and scared.

Tyrrell's Sarah early on shows promising signs of what's called a character arc. She arrives intent on proving she's is an extremely well-adjusted young woman, polite and accommodating, then takes an interesting turn as she stands up to Joan and matches her blow by verbal blow. In the end, however, the language could be more varied to hold our interest.

Reed and Odera Adimorah, who plays Sarah's boyfriend Mark, ably portray two decent guys with varying reactions to a three-way female boxing match, but director Quinn hasn't given them much to do in the way of blocking (stage movement). A couple of times, actors seem to just walk offstage without making a definitive exit.

There was no question about one thing in this production, however -- the heartfelt commitment of the cast  to Quinn's script and director Quinn's smooth work with actors and text. Here's hoping The Danaid has a longer life.

Posted by Solange De Santis at 11:18 PM No comments: