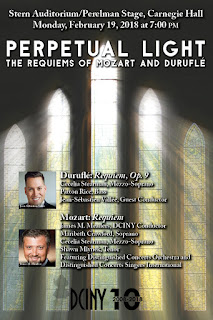 One advantage of these family events is the presence of young people in the audience, and (a few) in the choir. A girl, perhaps 15, sat in front of me, intently absorbing the music. Across the aisle sat one girl with blue hair and another with fuschia hair. It may not be explicitly stated in DCINY's mission, but the "parent" organization is also raising the classical music children of the future.
Posted by Solange De Santis at 7:51 AM No comments: