When I led drama workshops for a couple of years at a recurring “Children’s Day of Art” in Morristown, N.J., I would ask the kids, “what’s the difference between theater and drama?”

The simple answer is that theater usually takes place on a stage while drama is all around us. Today, however, I saw the drama of the streets create a unique form of theater, improvised, spontaneous, rapidly shifting and gone in an instant.

I walked down Lexington Ave. in Manhattan from 61st St. to 43rd St. at about 3:30 pm, when the late December sun was already beginning to head for its rest and twilight – the “blue hour” – began to shade the sky.

I walked with purpose toward the trains at Grand Central Terminal but at a medium pace, a little slower than usual. I gazed at the urban landscape with wondering eyes, open to whatever scenes might occur. 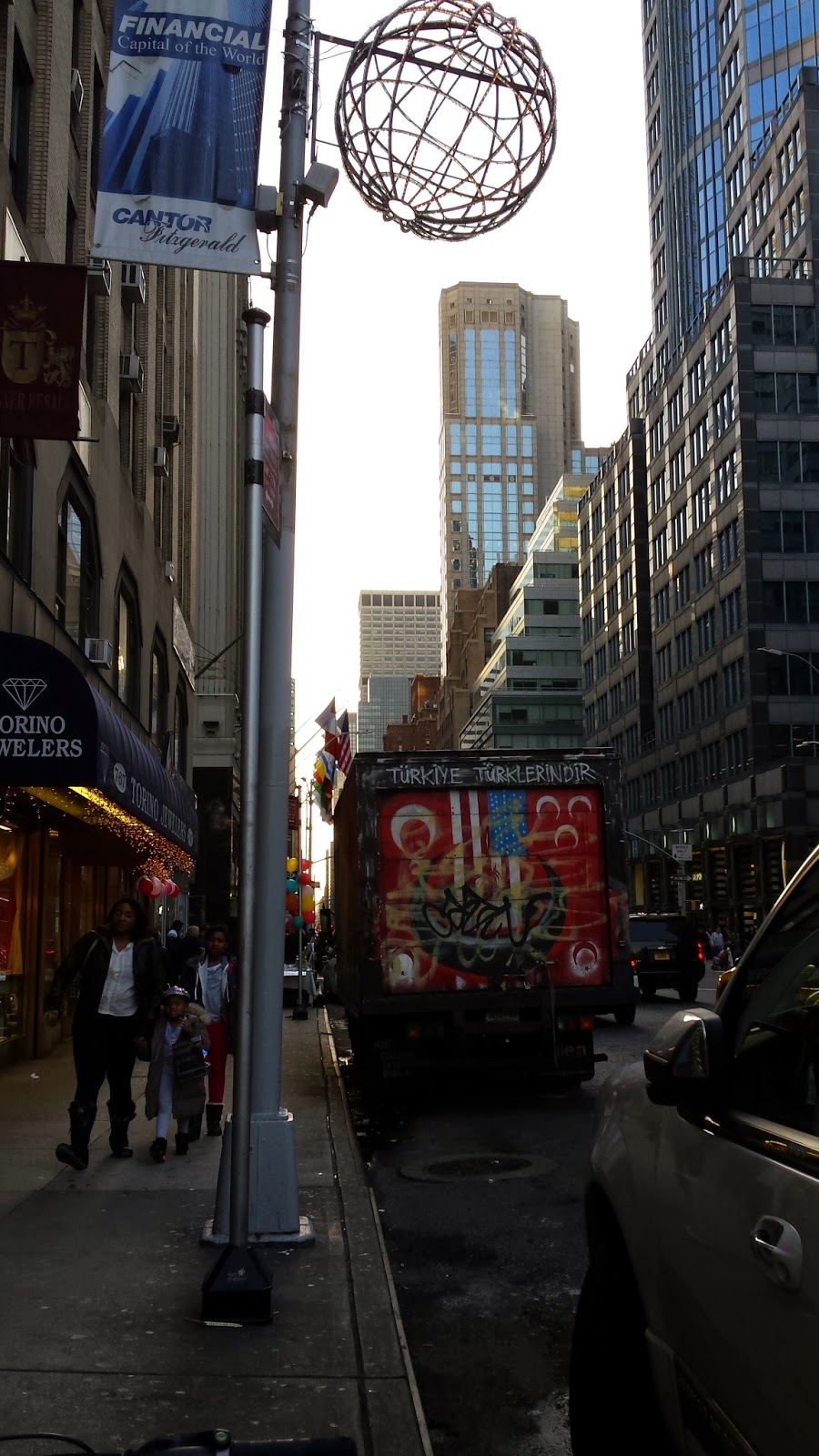 The "set" whispered its own stories - a banner from Cantor Fitzgerald, the financial firm that suffered terrible losses on 9/11, proclaiming New York "financial capital of the world;" Torino Jewelers' glistening show and a colorful truck proclaiming its allegiance to Turkey and the U.S., but overlaid with a graffiti artist's work.

Outside a hair/cosmetics salon, a tall, dark engaging young man was handing out samples of a face cream.

His patter was so expert that I entered the store with him and found myself seated on a stool while he applied a little of the cream to the, um, laugh lines around my eyes.

"My name is Leo," he said, asking for mine. He said that the first part of my name, "sol," is a musical note and that he was part Israeli.

"Leo," I said, smiling, "you are very charming and I'm sure the cream is wonderful. But I am putting my daughter though college and I will say good night." He smiled. I got up and left. 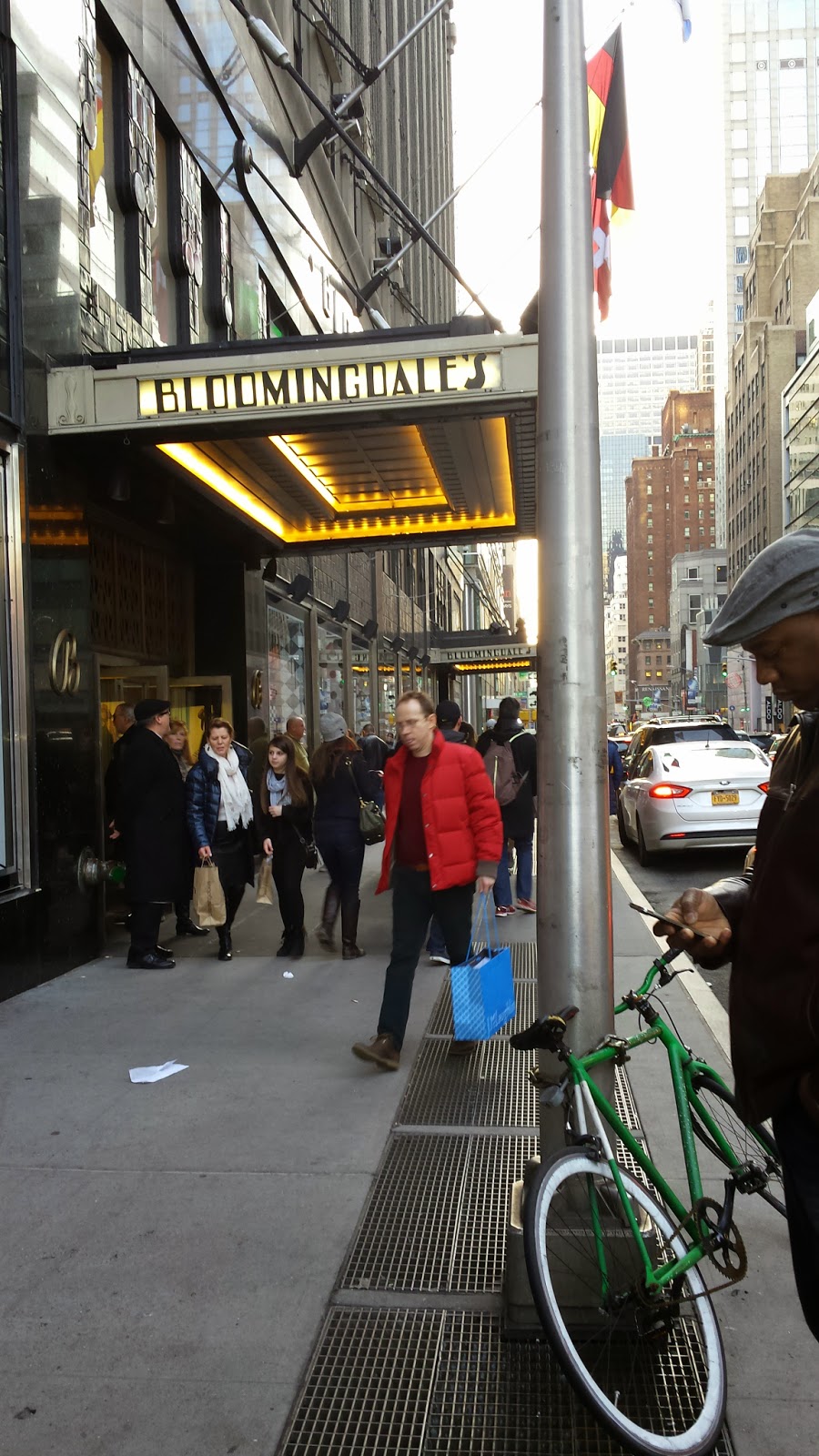 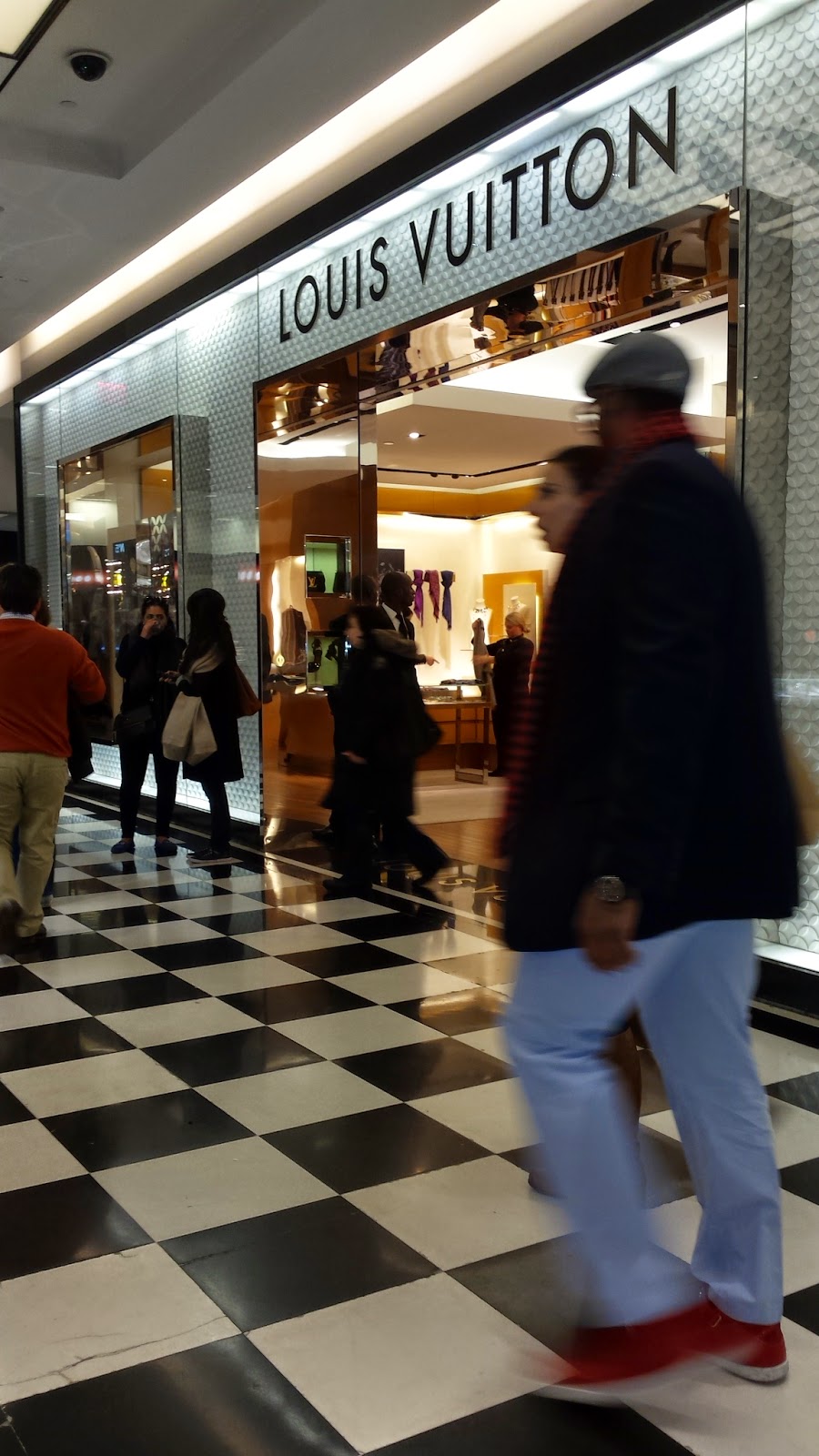 I passed Bloomingdale's and entered, not having been there for many years. Now, the department store's main floor is a series of brand boutiques - Coach, Gucci, Vuitton - each in an enclosed space, like a mall or a stage.

I found it odd and wandered, as did most of the other shoppers, in post-holiday stupor. I thought I might find a sweater on sale and traveled on the escalator up one floor, but only found $80 shirts. 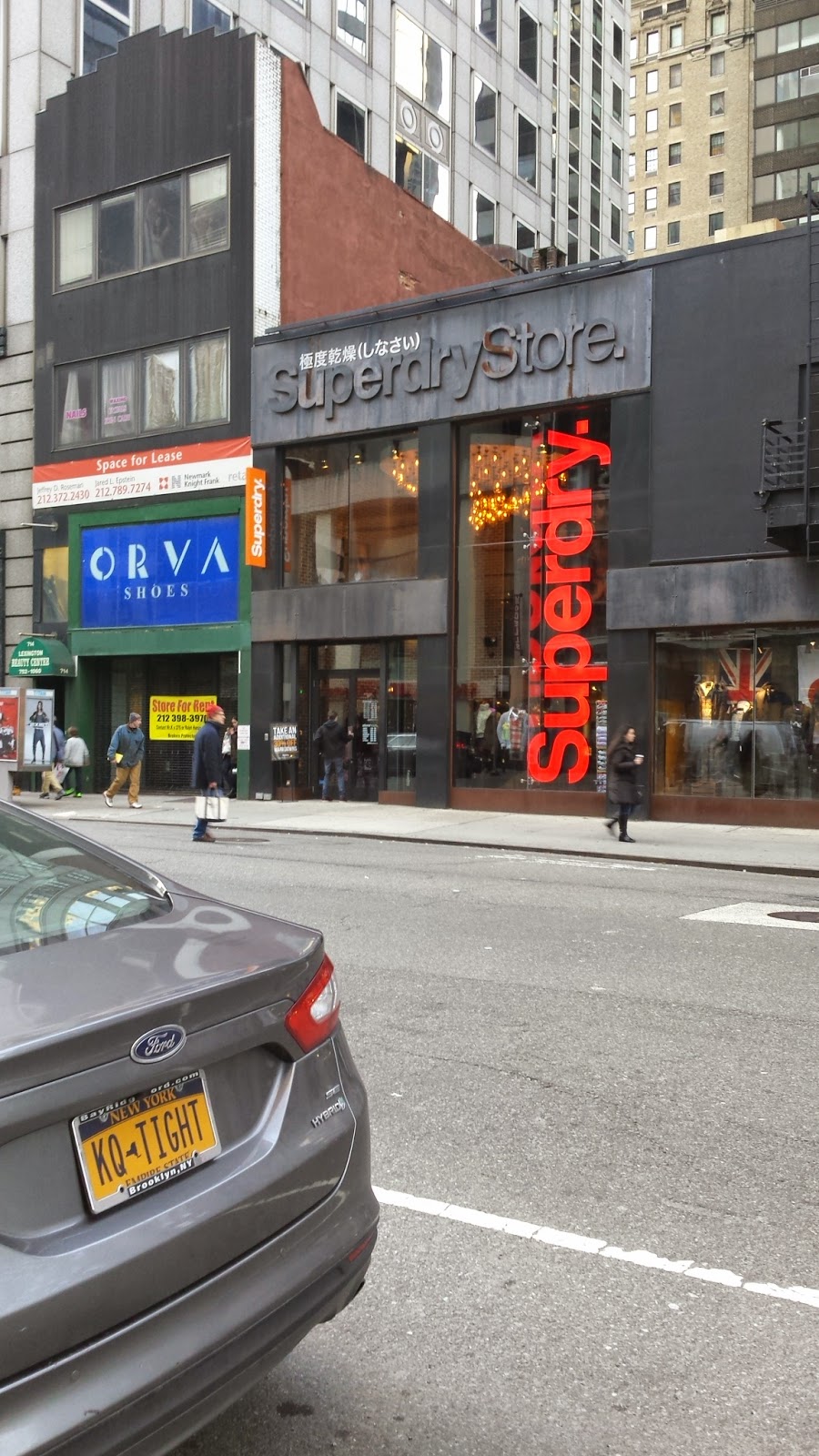 Back on the street, I gazed at stores whose purpose and merchandise I could not fathom - Superdry?

Twice on my walk, giant limousines - one black, one white - cruised down Lexington, headed for Saturday night revelry. In one, a passenger hung out an open window, videotaping the ride.

As I approached Grand Central, I passed a middle-aged man holding out a paper cup, shaking the coins in it. I took out my wallet, circled back and put money in the cup. "What is your name?" "Mike."

I wanted to wish Mike well but my inner playwright failed me and came up with possibly the most inane line ever, under the circumstances: "Happy holidays, Mike." 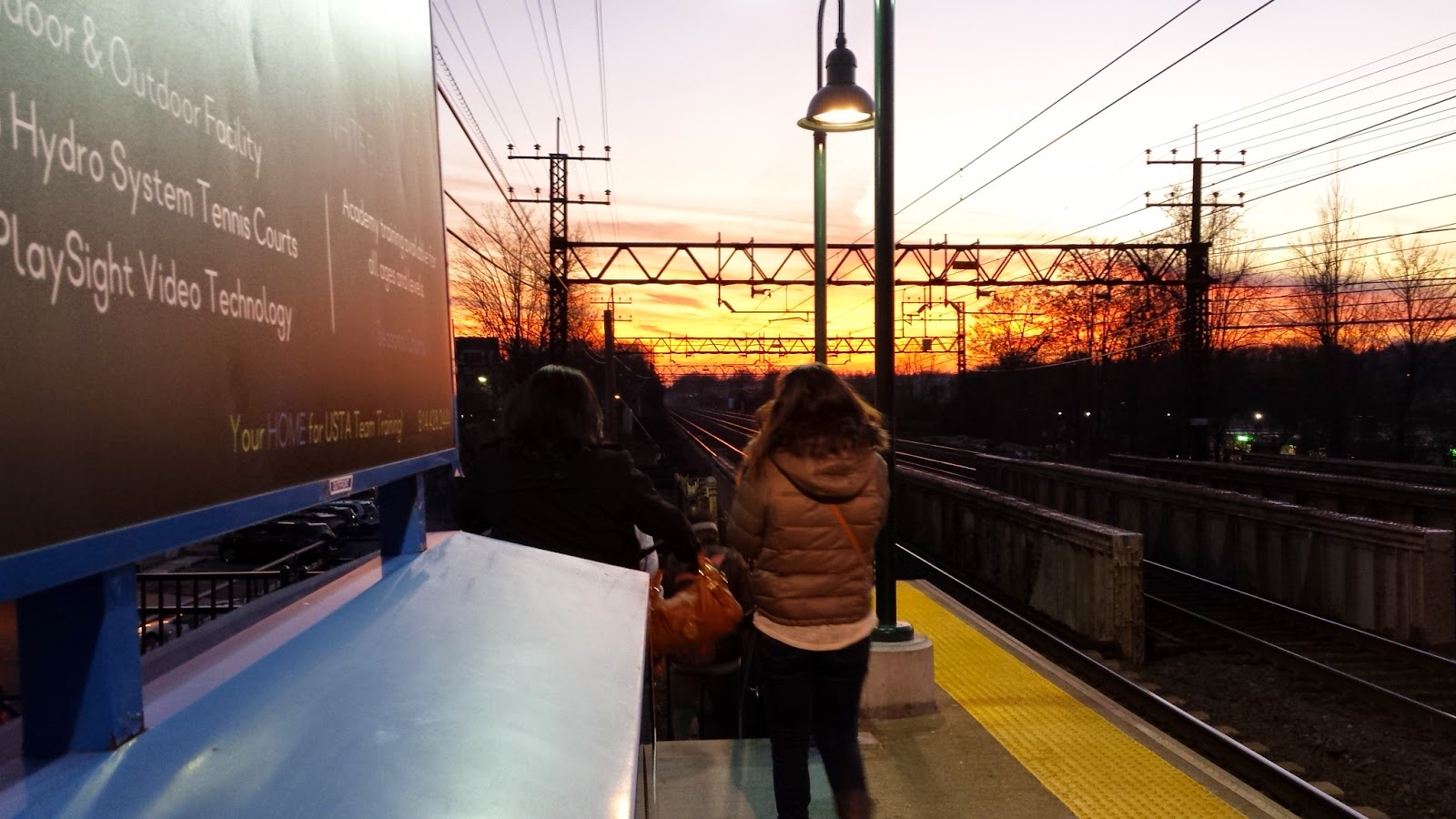 I arrived at Grand Central, where the glittering railway house was inhaling travelers to the suburbs and exhaling the night's city explorers.

As I headed home, where a vivid sunset greeted me, I realized that another difference between theater and drama is that a performance has an ending but the stories of the streets flow like an endless river.

Posted by Solange De Santis at 10:59 PM No comments:

Of late, it seems, this theater blog has been covering music. Well, what of it? The two are intertwined; every presentation of music has an element of theater and every piece of music tells a story.

They almost made it to 90 at that site, but the building and the company have been sold. The good news is that Steinway continues under new ownership and is moving to new (though less ornate) quarters in Manhattan. The gorgeous rotunda, reminiscent of a Vienna salon, will be preserved in the new building that will arise around it.

I recently received a tour, courtesy of my friend Michael Cabe, institutional sales representative at Steinway. As he recited the building's history -- designed by Warren & Wetmore of Grand Central Terminal fame -- we walked through room after room of pianos.

Steinway Hall also has quite the art collection, with paintings of great pianists and composers, and such artists as N.C. Wyeth and Rockwell Kent represented. Note the wood floor in the photograph above. All the showrooms have that parquet floor, made from wood that came from the Steinway factories.

The company's 161-year history is well represented, also, with artifacts, small models of historic pianos and dioramas lining the halls. There are also custom pianos, such as the John Lennon model, which has his artwork on the music stand, his signature and song quotes.

But what I was really excited about was seeing the storied basement, where concert artists from Horowitz to Gould to the greats of today came to try out pianos for their performances.

I had brought my Chopin book, thinking I could perhaps get to play one a little. I especially wanted to play the Prelude in C minor, No. 20, Op. 28, hoping to get every nuance of Chopin's profound chords, particularly in the bass clef, where the Steinway growls like a lion.

Before the basement, Michael showed me the room with the famous Model D nine-foot concert grands and graciously left me alone for a few minutes. I sat down at one of the instruments, was a little nervous at first, then started to relax into the experience and greatly enjoyed it.

On his return, Michael, who is a jazz pianist himself (here is his website) suggested I try another piano in the room, his favorite, and the minute I started playing it, I was in love. I went back to the other piano and played a chord, then dashed over to the new one and played the same chord.

It was astonishing -- this piano had a complex voice and a soul. Each note was so rich and deep; it seemed to contain shades of notes. The tone was bright, yet warm and intelligent. It was so responsive I felt I could play a range of dynamics between piano and pianissimo, or forte and fortissimo. When I finished, I put my head down on the piano and embraced the music stand. "I want this one," I said.
The price tag was equally stupendous - $132,000, and that was on sale. Original price? $150,000.

I looked at the monthly payments, after a 10% down payment, and began to dream. But even if $1377 a month for ten years was doable, there was the little matter of fitting this aircraft carrier of an instrument inside an apartment's 20-foot living/dining space.

This is the Steinway magic. I can't forget that piano; it's living in my head now. Maybe I can convince Michael to let me play it one more time at Steinway Hall, or maybe it's already on its way to the new digs.

I would love to know where #596708 ends up; maybe in a music school where it could be accessed, who knows.

We did make our way down to the basement after that, where the ghosts live comfortably with their modern counterparts and men with large muscles move an average of one instrument a day in and out of the building.

But I left my heart up on the first floor, where #596708 awaits a caress from the next set of piano-loving hands.
Posted by Solange De Santis at 1:27 AM No comments: