Saturday nights may buzz with social energy, but Friday night should be a time when the cares and stress of the workweek are set aside at least for a few hours. The triumphs of the days just past can be savored and good work relished; conflicts and unfinished business perhaps will look better on Monday morning.

Last Friday, I ended the week by stepping into a musical world of peace and beauty - a performance by the Riverwinds Woodwind Quintet at New York University's Maison Francaise in Greenwich Village. (The group's name refers to the fact that several players are based in Westchester County towns on the Hudson River.)

Occupying a 19th-century carriage house on cobblestoned Washington Mews, the Maison hosted the performance in its elegant cream-colored ground-floor salon.

I'm no stranger to chamber music, but it's been mostly string quartets and chamber orchestras. However, the woodwind quintet - flute, oboe, bassoon, horn and clarinet - isolates those breath-supported voices that transform the very air.

The all-French program contained wondrous discoveries around every corner. These were a few favorites:

Ravel's four-part Le Tombeau de Couperin was written as a memorial to friends killed in World War I.

The sprightly first movement (Prélude) seems at odds with such a somber subject, but, as Ms. Frank noted, Ravel said, "the dead are sad enough, in their eternal silence."

The first movement of Gounod's Petite Symphonie (there is a sound file on this web page, if you want to listen to it), arranged by Mayer for Riverwinds, begins with a majestic adagio, then swings into an irresistibly bouncy allegretto.

I was not familiar with the work of Jacques Ibert, but who could resist the sunny first movement (Allegro) of three short pieces (Trois Pièces Brèves).

However, the piece that really transported me out of jangly urban Manhattan was Milhaud's Le Cheminée du Roi René, a work with a medieval flavor that references the 15th-century king, René of Anjou. The seventh and final movement is the poignantly serene Madrigal-Nocturne.

Clearly one of New York's more-accomplished wind quintets, Riverwinds created a sublime program that brought the week to a close with harmony and grace.

Posted by Solange De Santis at 1:32 AM No comments:

Heading for a production of Miss Saigon at the Irvington Clocktower Players in Irvington, N.Y., I wondered whether the musical would seem like a period piece, in the general sense and for me personally.

Next April will be the 40th anniversary of the fall of Saigon, a phrase that conjures up a host of sensations for anyone who remembers the Vietnam War. I first saw Miss Saigon in 1993 in its landmark Toronto production. (The producers built a whole theater for it.) So both these dates are fairly far in the past.

The other question in my mind was theatrical. When the show opened in London in 1989, it was well known for a particular special effect - a helicopter descending to the stage to pluck away American and Vietnamese evacuees as Saigon succumbed to Communist forces. So how could a community theater measure up? 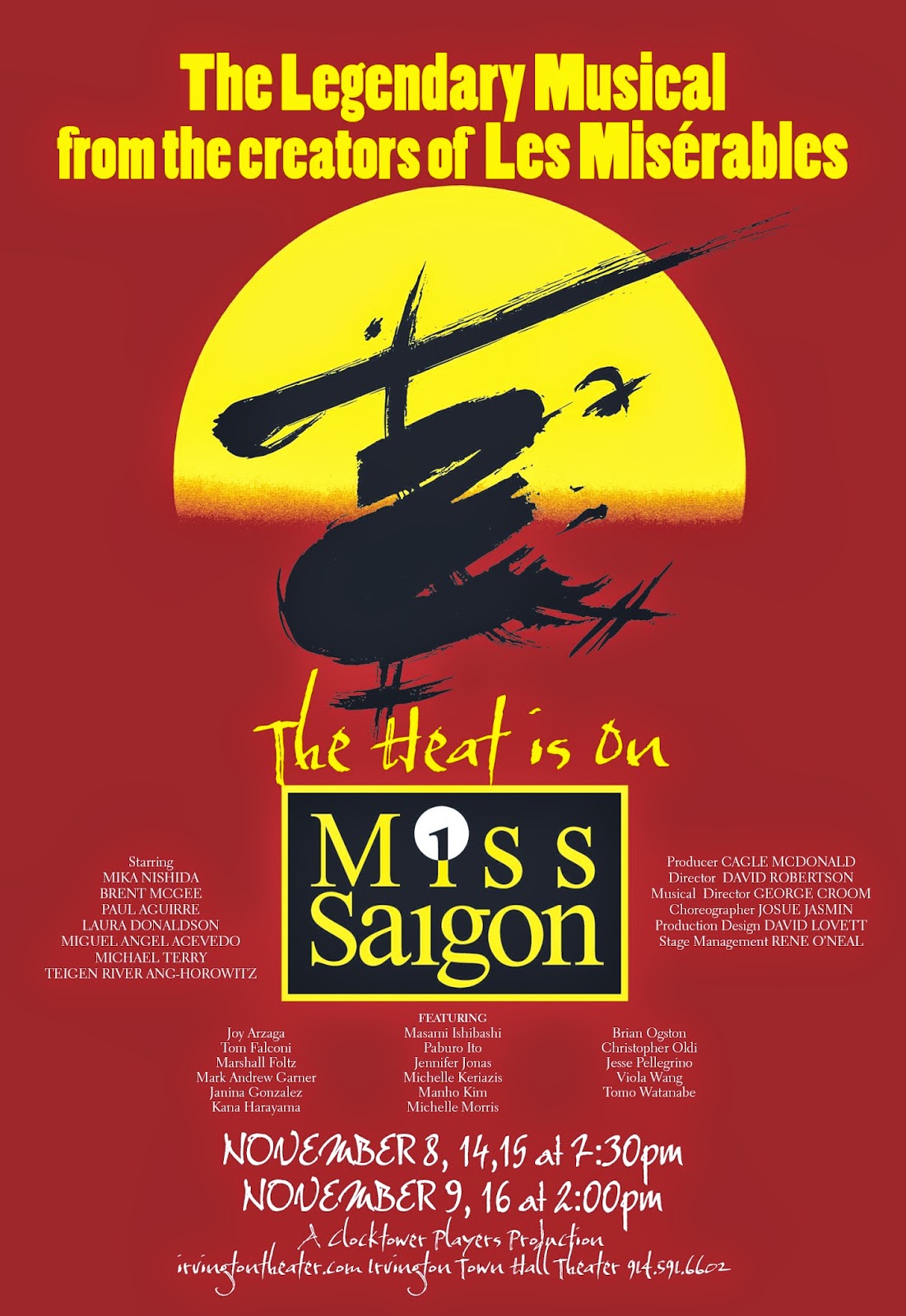 It's possible that David Lovett's set of movable frames covered in translucent fabric and black boxes that become a bed, a bar, etc. actually put more focus on the human characters slammed by the viciousness of war.

Although my flip response in 1993 to Claude-Michel Schönberg and Alain Boublil's updating of Madame Butterfly was "Puccini did it better," this time the story and music affected me more deeply.

"Butterfly" is Kim (Mika Nishida), a girl from the countryside caught up in the Saigon bar scene, catering to American soldiers.

One of them, Chris (Brent McGee), falls in love with her and she with him, but they are separated in the chaos of the war's end.

Pushing the action forward is a Eurasian nightclub hustler/pimp/con man called The Engineer (Paul Aguirre), who washes up in Bangkok after the war where Kim has given birth to Chris' son.

Several years later, Chris arrives in Bangkok, having learned that Kim and his son are there -- but he is also accompanied by his American wife. Tragedy ensues.

The singing, acting and dancing are uniformly very strong - Nishida and Aguirre are Equity actors and McGee lists opera as well as musical credits.

Nishida is an experienced Kim, as her bio notes she first played the role in 1999 in the second national Broadway tour and that this will probably be the last time.

Although she is clearly not 17, Nishida beautifully communicates Kim's innocence, core of steel and overriding love for her child. McGee's Chris is a man who is basically decent but trapped in the ultimate no-win situation.

Aguirre's Engineer will survive wherever he finds himself, on a combination of smarts, cunning, deviousness and wicked humor. He is, of course, the most interesting character in the show.

Director David Robertson keeps an intense focus on the songs, supported by a topnotch 13-piece band, conducted by George H. Croom. Larry Alexander's sound design was crystal-clear although for me the volume could have been dialed down just a notch.

Lovett also did the lighting design and the effects are achieved through lighting and sound. I did think the set was a bit too sparse throughout the first act and wondered why the designer didn't make more use of projections, especially since Terry's song, "Bui-Doi," is accompanied by projections of Amerasian children left behind by U.S. servicemen.

One adjective you can't apply to Miss Saigon is "subtle," and I think Robertson could have brought the emotions down just a little - actually, "Bui-Doi" is an example. When the actors are using up all the air in the room, it's hard for the audience to feel.

So did it feel like belonged in the past? Yes and no. I think anyone who was not alive at the time can't appreciate the show from the same viewpoint - and that's probably my prejudice. However, anyone can realize that universal themes of love and, sadly, of conflict exist now and have through the ages.

As for Clocktower Players, now that I know the high level of their productions, this won't be the last time I'll be seeing one of their shows.
Posted by Solange De Santis at 9:35 PM No comments: