The time of one's life 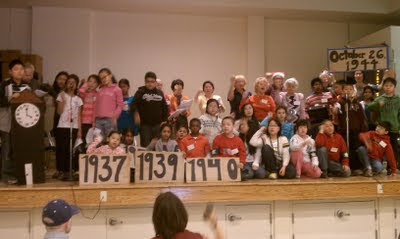 Realizing that variety is the spice of blogs, I am tearing myself away from Broadway to write about a special theater project in which I participated this week. See that crowd up there? Those are fifth-grade kids and seniors in Flushing, Queens, dramatizing their lives, reaching across decades and oceans to connect through the simple, timeless things - games, memories, teachers, birthdays, moms and dads.

See the elderly gentleman in the baseball cap in the lower left? He's 93 and he was part of a show that told his story of surviving the Holocaust (the date signs). Because of the cultural diversity of the groups, he saw an Asian boy play him as a youngster and an Asian woman lovingly play his mother. In a different scene, another man in his 90s saw his younger self listening to a story told by a memorable kindergarten teacher, and choked up a little as he said one of his lines: "and here I am, 85 years later."

Two older women recalled the games of their youth in the streets of pre-World War II New York and today's kids mimed jumping rope and playing dodgeball as they spoke. Bill, Bennett, Lily, Irving, William, Billie, Joan and the whole cast of about 40 traveled a remarkable journey this school year.

For the performance, I designed and operated the sound. I was involved each Tuesday since my attendance and the paper I'm writing fulfilled the final three credits needed for my NYU Master's degree in Educational Theater. This program, which brought elders and one class of fifth graders from P.S. 24 together every Tuesday morning for an hour at the Self Help Benjamin Rosenthal Senior Center, was sponsored by an agency in Brooklyn called Elders Share the Arts.

My participation was to assist teaching artist Marsha Gildin who ... (deep breath) ... led each Tuesday session's games, lessons and exercises; wrote the script; directed the show; created an enormous number of set pieces and props (like the date signs) and coached, nagged, laughed, instructed and inspired everyone to do his/her best. That's the back of her head at the bottom of the picture.

A different type of theater, for sure, but every bit as meaningful as a party at Sardi's.
Posted by Solange De Santis at 11:53 PM