A show to shake the world

If you were young in the Sixties, the release of a record album was a seismic event. Sergeant Pepper, Beggar's Banquet, Highway 61 Revisited, Are You Experienced?, Pearl, Surrealistic Pillow - they expressed the longings, passions, obsessions of a new generation and, especially, a white-hot outrage at oppression at home and a far-away war in Vietnam that was sending young Americans home in body bags by the day.  But rock and Broadway went separate ways, until Hair. 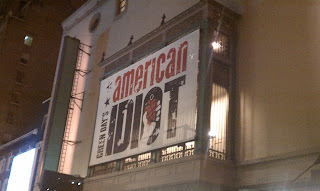 American Idiot, the album by Green Day and the Broadway show I caught up with late in its run, are worthy successors. Flo and I first saw the show last week and - most unusual for me - went back a second time last night. I was absolutely blown away - by the blazing songs, wall-of-video staging, and the sense that this is America today. There is another war - two! - keeping the casket factories in business and the album was written during the Bush II era, when the hard-asses were in charge and no one seemed to be listening.

But war isn't American Idiot's sole preoccupation. The knock on this show was that it had no book. Now, one version of my business card calls me "narrative wizard" and nothing makes me crazier than a show with a poor story. This doesn't apply to American Idiot. It's a true opera telling its story in music, giving us three friends who take personal journeys (one into the military) and "come home" both literally and to their real selves.

The spoken dialogue (I would almost call it recitative) is white-hot poetry, punctuating the music with extraordinary drama: "Let's start a war, shall we?" "Tell the bishop there is a resistance occuring." "Hang your dark clouds." "The end of the world is over." "Where do all the martyrs go when the virus cures itself?" "Jesus is doing our paperwork now."

The extravagantly talented Billie Joe Armstrong, Green Day's lead singer and lyric writer, is playing St. Jimmy, the lead character's dark side and alter ego, in the last few week's of the show's run and he seems to be a generous man. A huge star in the rock world, he doesn't need to take the lead role or be the constant center of attention on stage. His participation serves the show and afterward, he signed many autographs for the fans on 44th Street outside the St. James Theater. 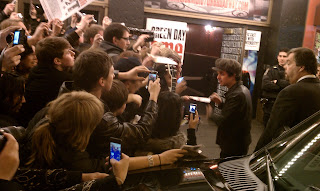 It's been a while since I bought a rock album. There just seemed to be so many groups and genres and I now had adult concerns - a family, a career. The cast album of American Idiot is sitting on the desk next me and I plan to get Green Day's latest, 21st Century Breakdown. I think I'll head now for the CD player and the big stereo speakers and rock the world.

Posted by Solange De Santis at 8:49 AM