Beautiful song, not so beautiful play 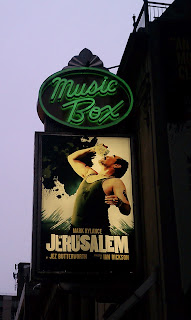 The song is "Jerusalem" and it doesn't have much to do with the Middle East, nor does the play of the same name by Jez Butterworth  currently gracing Broadway's Music Box Theater. Perhaps "gracing" is the wrong word for the play's protagonist, a ne'er-do-well named Johnny "Rooster" Byron living in an Airstream trailer on the outskirts of Flintock, Wiltshire.

Johnny, played by the awe-inspiring Mark Rylance, walks with a ferocious limp, the result of an Evel Knievel-like daredevil career, regularly gets drunk, plays loud music, ingests various substances, tells tall tales and is of course a magnet for various town characters, including a dotty professor (bit of a cliche alert here), a marvelously comic Morris dancer and disaffected teenagers, to whom he deals some weed and occasionally boffs (the female ones).

He is, like his poet namesake, "mad, bad and dangerous to know," and a general nuisance to the citizens of Flintock, which is expanding its housing developments and sends the police to evict him. Johnny, hearkening back to the mythical England of King Arthur and Stonehenge, which isn't far from the real Flintock, vows to make a last stand.

Rylance, who won the Tony Award for best actor in a play, opens his giant steamer trunk of acting skills - there is a physical sequence at the beginning of the play that is nearly a Dance of One Who Is Hung Over - and almost made this viewer care about a man who is actually rather a creep. (To digress for a moment, I wasn't quite as hot under the collar as the Times' Brantley, who said we would respond with "glassy-eyed rapture" to Rylance's performance. I can get more wound up about theater than anybody, but at that point, felt like responding, "dude, it's just a play.")

I also have to muse at the conceit of male writers who seem to think attractive women are just dying to go to bed with dirty men. This phenomenon occurred also in the film "Crazy Heart," where lovely Maggie Gyllenhaal gets into it with Jeff Bridges' chain-smoking, drinking, sweaty, beer-bellied country singer. Sheesh, I'd at least ask him to take a shower and brush his teeth. But this is fantasy, isn't it!?

Back to Jerusalem, a two-hour play wandering around a three-hour evening. It's hard for an American to realize how potent the song by Charles Parry, set to a poem by William Blake, is for Britons. It evokes the England of St. George and the dragon - but is that England really now in the hands of Johnny Byron, who is hardly an attractive free spirit but who has abandoned a young son and has no problem screwing a 15-year-old girl. Her relatives come looking for satisfaction. As a parent of a 14-year-old girl, I can't condone what they do, but I can't see Byron as a hero, either.

And if he isn't a hero - if this is who now represents the "green and pleasant land" -  then Butterworth is making a very dark comment on contemporary England, indeed.
Posted by Solange De Santis at 3:54 PM