My return to live theater after the wrenching pandemic hiatus took place in two very different locations: the St. James Theatre on Broadway and the Seagle Festival (formerly the Seagle Music Colony) in the peaceful confines of New York State's Adirondack Mountains.
My return to Broadway was the re-opening night of David Byrne's "American Utopia," which had been scheduled for a second Broadway run in the fall of 2020, but Broadway theaters were still closed then. 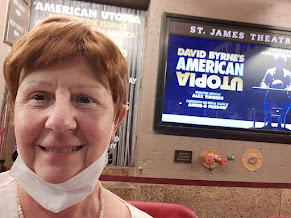 As I walked from the Times Square subway station down 44th Street to Eighth Avenue, I saw half the shows still had not opened and, most distressingly, there was a sign on Sardi's front door that it was "under renovation" and would open in the fall.
Who wants "renovation" at Sardi's? Nothing should change! OK, maybe new carpet and fresh tablecloths. Don't touch those caricatures on the wall. Even the "Ladies" and "Gents" restroom signs have been there for 40 years.
At Eighth Avenue, I bought a hot dog from a street vendor for a quick supper and asked how business was going. "Kind of slow," he said. The tourists are only slowly coming back.
I took in the blue-black sky, the busy lights and all us characters on the street. I remembered drinking with friends in Eighth Avenue bars in the 1970s, when the street was rough, and thought, with an inner smile of deep affection, "my city."
I made this little video of typical hustle on just one street corner in the theater district, a scene of sweet clamorous joy compared to the recently-dead streets:
https://www.instagram.com/p/CUxhlCagkZR/
At the St. James, vaccination cards and ID were checked. Everyone was in masks and I lingered in the lobby near the bar, enjoying once again the yakky noise surf of an audience finding its way into a theater, but this is now how it looks:
https://www.instagram.com/p/CUxiyxHg0U5/
If there was any doubt that theater was missed, from the moment the house lights dimmed, the mood was electric! After the first song, "Here," the audience jumped to its feet, cheering, clapping, as if for a show-ending standing ovation, causing Byrne, smiling and a little nonplussed, to say, "There's more."
"American Utopia" is a concert with choreographed movement by Annie-B Parson of songs by David Byrne and his former group, Talking Heads, whom I remember well from late nights in the 1970s at the Bowery rock club CBGB, and other downtown locations.
Talking Heads wasn't so much punk as artsy/avant garde music that commented obliquely on the zeitgeist, but with a solid rock beat, often driven by bassist Tina Weymouth, a standout for rock groups, which were often all-male.
Their first hit was "Psycho Killer," one of my favorites, but not included in "American Utopia," a show whose title, Byrne says, is not ironic.
Dressed in the gray suit that is the cast's costume, Byrne begins seated at a desk with a model of the human brain. He talks about the brain's neurological connections, communicating the message that we are all -- including him, in his long career mastering various artforms -- just trying to make sense of our world.
The show's arc reflects a man's long look at the landscape of existence, and songs that were arch 40 years ago now resonate with the perspective of age. Take "Once in a Lifetime." The link to the YouTube video shows a young David Byrne asking the song's questions, accompanied by stylized, herky-jerky movements.
But now, with both the singer and the listener in their 60s, these lyrics are not just questions: "You may ask yourself, well how did I get here?" "Am I right?" "Am I wrong?" and "My God, what have I done?"
Mind and memory cast back to the exploratory energy of youth, but when there is less of life ahead of you than behind you, these lyrics land with new meaning: "Time isn't holding us/Time isn't after us/Time doesn't hold you back." And the refrain: "Same as it ever was."
When the years pass, and you lose people you love, when the oldest and then the older generations pass and you are now the elder, you inhabit the song "Every Day is a Miracle":
Every day is a miracle
Every day is an unpaid bill
You've got to sing for your supper
Love one another
The raucous, pent-up enthusiasm from the opening number did not wane! Throughout the show, the audience leapt to its feet at least half a dozen times, cheering, clapping, dancing to "Burning Down the House." I've never experienced anything like it in the theater.
Byrne's larger message is not one of nostalgia, but of hope. He talks about the urgency of voter registration, with representatives from the organization HeadCount in the lobby with sign-up cards.
He comments forcefully on the recent protests for racial equity and against racist police violence, performing Janelle Monae and Jidenna Mobisson's song "Hell You Talmabout."
While identifying these ills, he reflects on the real physical illness abroad in the land, welcoming the audience at the beginning with "thank you for leaving your house," noting wryly that the phrase used to be a joke for the show's opening.
At the end, he returns to the great mystery of the human brain: "Our brains can change. We are not fixed. We can imagine a different future."
He notes that what people most like to view is not a lovely landscape or something as mundane as a bag of potato chips: "It's us - you and me, and that what the show is. It's the connections among all of us."
The show ended with the jaunty "Road to Nowhere," with a nihilistic title contradicted by lyrics such as "feeling that time is on our side/take you there" and "it's very far away/but it's growing day by day and it's all right."
In an unusual move, Byrne brought stage crew members out to join the cast for bows and the audience clapped and cheered on and on, reluctant to let anyone leave the stage. That can't be replicated on Zoom.
*                 *             *
The next post: Utopia in the Adirondacks.
Posted by Solange De Santis at 8:42 PM