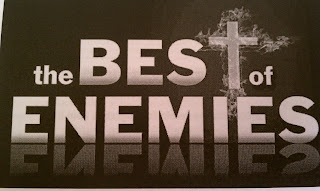 This is an important play for our times, as much for what it subtly says about economic status in America as for its illumination of an inspiring story. Beyond the always-emotional story of enemies who become friends, it's important, too, to shine a light on such groups as the KKK and on events and attitudes that aren't so far in the past - just 40 years, in the case of The Best of Enemies. Today, with a black President and a working class devastated by recession, we need to hear this play.
Posted by Solange De Santis at 2:53 PM