Where do you find a "normal heart?" 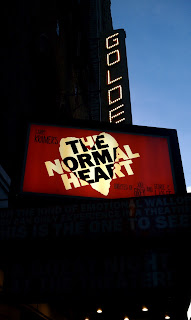 Larry Kramer's 1985 play, "The Normal Heart," now having its first Broadway production, has become both an elegy for the past and a kicking, screaming, yelling wake-up call for the future. It's an account of the beginning of the AIDS crisis from 1981 to 1984, when initially the new disease didn't even have a name.

Kramer, a gay New York writer, railed at just about every institution - government, medical - that failed to take AIDS seriously because it "only" affected gay men, and at his own community for being fixated on promiscuous, sometimes dangerous, sex as a liberating lifestyle.

Co-directors George C. Wolfe and Joel Grey and designer David Rockwell have set the play within a white box set embossed with such key phrases as "Patient Zero" (the designation for one of the first known AIDS cases). Set elements such as desks and chairs are carried on and off, but the spare staging doesn't feel empty as the performances seem to fill up the room.

As Ned Weeks, Kramer's alter ego, Joe Mantello is a rumpled, wiry, intense presence, exasperated with the world's dysfunctions in general and afflicted with a bad case of only-I-can-see-the-truth. The kicker is, this is Kramer writing about himself, laying bare the lovely and not-so-lovely aspects of his own character. In the end, this is what prophets are like - impossible to deal with up close and essential for humanity's survival. 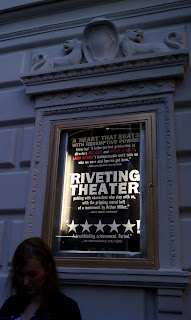 Looking back on that time, I remember nights in the incredibly decadent atmosphere of Studio 54, with its waiter boys in tight white satin shorts, socks and tennis shoes, and little else. Disco felt like sex on the dance floor, with the scent of poppers heating up the action. We were dancing on the rim of a cliff, in the innocent time before the plague.

This production won a Drama Desk award for ensemble acting and it was well-deserved. Ellen Barkin, playing another prophet, Dr. Emma Brookner (based on Dr. Linda Laubenstein), bites off her words as she desperately tries to figure out what is killing so many of her patients. Jim Parsons, of TV's "The Big Bang Theory" plays a character based on Rodger McFarlane, one of the founders of Gay Men's Health Crisis, the first organization to help people with AIDS. I knew Rodger - a fantastically tall (6' 7") sweet Southern man with a sharp sense of humor. He and I belonged to a choral group in the late 1970s. Then in 1981, I moved out of New York for a while, lost touch with him and noticed via a mailing that he'd become involved with GMHC.

One of the most affecting touches of this production is the use of video projection to list names of the dead on the walls of the set - just a few at first at the beginning of the epidemic. Then, at the end of the play, the names cover the set and walls of the theater. My seat mate, a man named Joseph Obermayer, who gave me permission to quote him, said there was a time during the epidemic that he just stopped having sex. "The Normal Heart" is still relevant, because "denial and fear" are still with us, he said.

After the play ended, with the names still on the walls, the audience filed out. Two men stood at their seats in the orchestra, contemplating the names. They were clearly together, but stood next to each other silently. There was only one word to describe their postures, their faces: reverent. They could have been in church. In a very real sense, they were.
Posted by Solange De Santis at 3:23 PM